Fabio Oberto, from the past to the future

I have been producing high quality red wines for a long time through my family winery Az. Agr. Andrea Oberto and I will always be very grateful to my father (Andrea Oberto) for giving me the opportunity to take part in the family business.

We have worked together for more than 22 years and today I can say to be very satisfied with the results we got from our collaboration. Now, the time has come for me to face new challenges. I am professionally ready to follow my desires and my ambitions.

My project for the future has a name: La Collina di Dioniso.

La Collina: The Hill. Langhe territory is well known for its smooth hills, which together give birth to a unique landscape.

Hill is also synonymous with sharing, in fact they are locations where wine makers/farmers share their own space with others. Especially, in those areas where land is very expensive, therefore it is easy to find many landowners on the same hill.

Dionysus. Definitely, all the people I am talking about are skilled wine makers and their vineyards are located in the best areas for vine growing and wine production. But, I can honestly say that everyone needs a good dose of luck in both business and life, today!

Because of this, I thought it was a good idea to ask a God for help, thus engaging someone who was a good wine drinker. I believe that Dionysus, the God of wine, is the right choice. 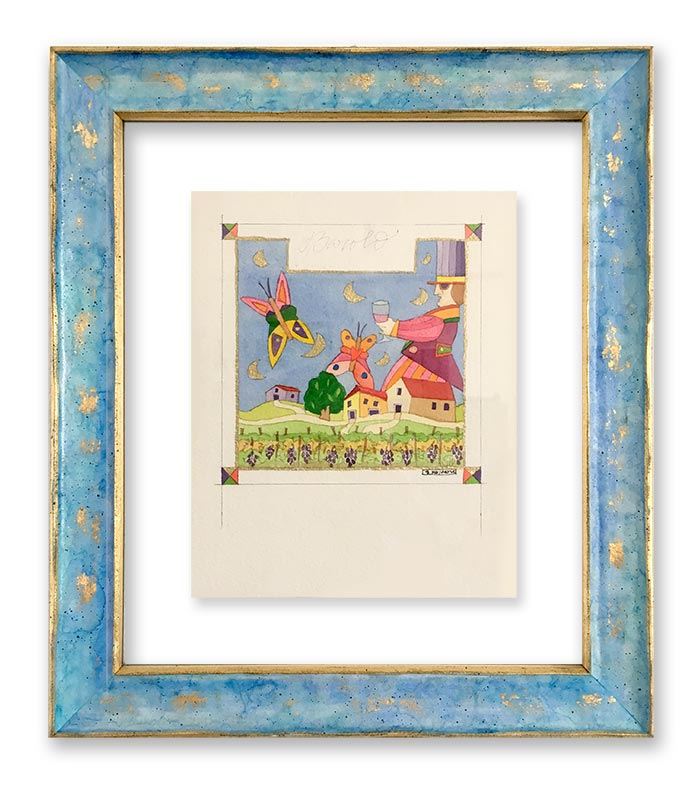 Dionysus is a divinity, initially an archaic and ancient god of vegetation, related to the vital lymph that runs in plants. Subsequently, it was identified as the god of elation, of wine, of euphoria and excitement, not to mention the liberation of the senses; it then started to represent the essence of the created in its incessant and wild flow, the divine spirit of the greek Zoé, that is the existence meant in the absolete sense, the hectic current of life that everything pervades.

One day Dionisio while wandering in the woods and countrysides, made his ultimate discovery, the vines, even better a bunch of grapes; he took the bunch, put it in a golden cup making a purple liquor come out. That ‘s how wine was born.

He tasted it and the first impression was to have created a new nectar able to make tiredness and pain disappear, thanks to a light sense of drunkenness and euphoria released…

He had all the gods of the wood try it and from that day forward numerous feasts / celebrations with wine took place, marymaking, but most of all where the cult of Dionisio was founded, made of euphoria, ecstasy, fury and a true liberation of the senses.

“The image of Dionisio with a hat welcomes us in the company, a work by the artist Francesco Musante. From this image, strongly connotative, we thought of the brand for our new company and the graphic study/project of the new labels. Re-interpreting, giving value and identity to the brand. The objective has been to create a solid image, coherent and efficient of the company’s identity, of its values, of its vision and placement, in order to make the brand recognisable and memorable.

The name “La Collina di Dionisio” was paired with the name Fabio Oberto to strongly marry this new reality to the experience of a name, the one of Fabio, known and recognised in the market, to show its own belonging in the territory, to the traditions other than reinforcing its visibility, recognition and memorization.

The labels have been developed with the intention of making them appealing to the distributors and the final clients, augmenting value, prestige and visibility to the new company. Without forgetting the values related to the territory and visual codifications connected to the types of wines treated”.

SELECTED WITH PASSION, MADE AS TRADITION